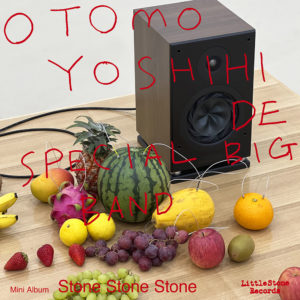 On May 25, the Otomo Yoshihide Special Big Band will start distributing their new mini-album “Stone Stone Stone” on their new label “Little Stone Records”!
This is the first album under the band’s name in six and a half years, and is a multi-lingual jazz-rock album with a hardcore taste, which is very different from their previous albums.

Recording of the album with the band members began in June 2020 during the Corona disaster. After more than a year of editing by Otomo and mixing by Shigeki Nakamura, the album was completed. The full album, scheduled for release this summer, will include a total of 9 songs, including 3 songs from the mini-album that will be distributed this time with different mastering. (The release date will be announced at a later date.)
The album jacket will be designed by Yuko Mohri, an artist whom Otomo admires, and designer Sei Suzuki. The newly launched Little Stone Records label will continue to release Otomo Yoshihide’s new and old albums on CD, analog, and digital formats, so please keep an eye on the label.

―――――――――――――
“Throw the Stone ! ” Otomo Yoshihide
The title “Stone Stone Stone” and the label name “Little Stone Records” are both named after the same thought. The origin of the name came from a tweet on Twitter by someone who said, “We threw many small stones and the mountain moved a little” when the political situation was slightly moved by the May 20, 2020 Twitter demonstration. At that time, I began to think that doing my usual job of making music in a fair manner was the same as throwing small stones. Let’s start by carefully making albums and labels one by one with the members we have been working with and the new people we have met. I created this work with such thoughts in mind at the Corona Disaster.
First of all, I would like to share three songs with you. We are going to start with three songs, and many more will be born from this label in the future. I hope this label will become a place where “throwing a lot of small stones moves the mountain a little.
―――――――――――――――-

●Artist Profile
Otomo Yoshihide
Guitarist / Turntablist / Composer / Musician
Born in 1959. He is a musician who makes a mountain of music for movies and TV, and is at home in the noise and improvisation scene. Guitarist and turntablist. He is active not only in Japan, but also in Europe, the U.S., and Asia. He has led many bands including Otomo Yoshihide Special Big Band, ONJQ, Small Stone Ensemble, and GEKIBAN. He has also produced many exhibitions and public projects that are in the middle of art and music.
After the earthquake disaster, he launched Project FUKUSHIMA! in his hometown Fukushima, and has been continuing various activities up to the present.
In 2014, he formed Otomo Yoshihide Special Big Band. In the same year, as director of Ensembles Asia, he worked hard to create a network of musicians from Asian countries. In 2017, he served as artistic director of the Sapporo International Arts Festival, and in 2019 as director of the reform of Fukushima City’s representative summer festival “Waraji Matsuri”.
Otomo Yoshihide WEB site http://otomoyoshihide.com

1)Stone Stone Stone (Otomo Yoshihide)
This piece was inspired by Kyoko Koizumi’s tweet on May 20, 2020, when the political situation was slightly moved by a Twitter demonstration: “I threw many small stones and the mountain moved a little.
It is a noisy blend of elements ranging from hard-core jazz to Japanese beats, in a multilingual conception that moves between multiple conductors, improvisation, and musical compositions. The intense improvisation of saxophonist Chris Pitsiokos, who is currently the focus of worldwide attention, shines through.

2)Music for Kinue Hitomi (Otomo Yoshihide)
-new version of ” Tatakau Jyoshi (Fighting Girls)”—
Dedicated to Japan’s first female athlete, Kinue Hitomi. Originally written for Kinue Hitomi’s part in the historical drama “Idaten”, the arrangement has been changed drastically and the song has been reborn as a new version. It is dedicated to those who struggle against discrimination.
Guests include ONJQ trumpeter Ruike Shinpei and up-and-coming Hokkaido saxophonist Yoshida Nonoko.

3)Hong Kong Hong Kong Hong Kong (Otomo Yoshihide)
This piece was inspired by the soundtrack (Otomo Yoshihide) of Hong Kong film director Anhui’s “Woman, Forty” (1995). In addition to the big band performance of the soundtrack, it is a collage of the everyday voices of Kahimi Khary & Niki Niki, a father and son living in the US, remote performances by Yuen Chi Wai of Singer Paul and Liu Han-Kil of Seoul and Yang Jun of Beijing, and a 2014 Hong Kong field recording by dj sniff.
The work is dedicated to director Anhui as well as to Otomo and his close friends in Hong Kong.