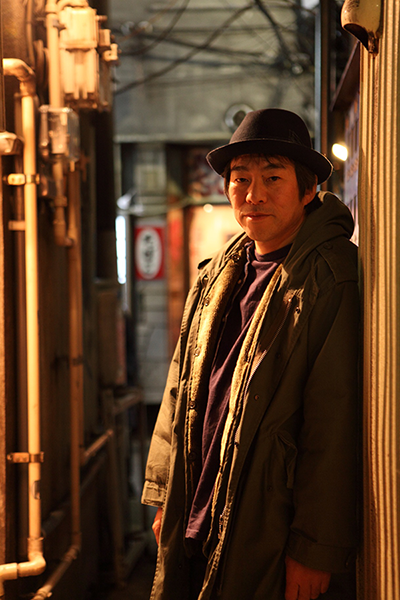 Otomo Yoshihide was born in 1959 in Yokohama, Kanagawa Prefecture.
He was a pioneering figure in the Electroacoustic Improvisation scene, and today is a musician and producer — a cross-genre music maker actively performing free improvisation, noise, and pop, simultaneously and independently on a global scale.
He has long experimented with electronic technology and his compositions draw from a wide range of musical styles.
As a teenager, he lived in Fukushima, where his interest in free jazz blossomed.
In 1979, Otomo moved to Tokyo to learn from improvisational jazz guitarist Masayuki “Jojo” Takayanagi and discovered ethnomusicology under Akira Ebato at Meiji University, studying Japanese pop music from the World War II era and the development of musical instruments during the Chinese Cultural Revolution.
In 1991, he released his first album in Hong Kong and performed there as the leader of the experimental rock group Ground Zero.
Since then, he has played overseas extensively.
After Ground Zero disbanded, Otomo’s sound markedly changed.
His current sound embraces simplicity and texture over dynamism and instrumental virtuosity, in sharp contrast with the distinctive plunderphonics of his earlier style.
He formed OtomoYoshihide’s New Jazz Quintet in 2001.
As a film composer, he has produced over 100 pieces of music for visual, film, and television works.
In recent years, he has been organizing unique conducted improvisation groups, in collaboration both with artists and non-musicians, under the name of “Ensembles.”
Additionally, he has been committed to music workshops and participatory projects with challenged children, and a music festival as part of “Project FUKUSHIMA!,” which started after the Great East Japan Earthquake in 2011, and for which he received a Minister of Education Award for Fine Arts in 2012.
In 2013, he received the Japan Record Award for his accomplishments, including composer for the theme music for the TV drama Amachan.
In 2017 Otomo was appointed artistic director of Sapporo International Art Festival and he currently serves as director of Ensembles Asia.